Ronald Breslow suggests that life-forms based on slightly different amino acids and sugars could take the form of huge, ferocious dinosaurs that have evolved to have human-like intelligence and technologies.

‘We would be better off not meeting them,’ says Breslow, who claims that it was a stroke of luck that an asteroid wiped out dinosaurs on earth, leaving the field clear for mammals such as humans.

On other worlds, dinosaurs could have evolved into huge, intelligent warriors armed with hi-tech weaponry – but without losing their hunger for fresh meat. 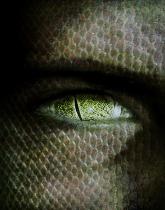 ‘Of course,’ Breslow says, ‘Showing that it could have happened this way is not the same as showing that it did. An implication from this work is that elsewhere in the universe there could be life forms based on D-amino acids and L-sugars.

‘Such life forms could well be advanced versions of dinosaurs, if mammals did not have the good fortune to have the dinosaurs wiped out by an asteroidal collision, as on Earth.

‘We would be better off not meeting them.’

In the report, noted scientist Ronald Breslow, Ph.D., discusses the century-old mystery of why the building blocks of terrestrial amino acids (which make up proteins), sugars, and the genetic materials DNA and RNA exist mainly in one orientation or shape.

There are two possible orientations, left and right, which mirror each other in the same way as hands.

In order for life to arise, proteins, for instance, must contain only one chiral form of amino acids, left or right.

With the exception of a few bacteria, amino acids in all life on Earth have the left-handed orientation.

Most sugars have a right-handed orientation. How did that so-called homochirality, the predominance of one chiral form, happen?

Breslow describes evidence supporting the idea that the unusual amino acids carried to a lifeless Earth by meteorites about 4 billion years ago set the pattern for normal amino acids with the L-geometry, the kind in terrestial proteins, and how those could lead to D-sugars of the kind in DNA.

I did not manage to find original one dated from 2012 only this one from 2010 please if someone could send me a link with a download from the original text from 2012 you would be helpful.

27/4/2011 – Tetrahedron Lett. – “Erratum to “The origin of homochirality in amino acids and sugars on prebiotic Earth[2]” – Erratum notice

18/5/2011 – Isr. J. Chem. – “Formation of L Amino Acids and D Sugars, and Amplification of their Enantioexcesses in Aqueous Solutions, Under Simulated Prebiotic Conditions[4]” –A review published by Breslow in the Israel Journal of Chemistry

25/3/2012 – J. Am. Chem. Soc. – “Evidence for the Likely Origin of Homochirality in Amino Acids, Sugars, and Nucleosides on Prebiotic Earth[5]” – Breslow’s perspective paper in JACS

11/4/2012 – ACS Press Room – “Could ‘advanced’ dinosaurs rule other planets?[6]” – Sensationalist press release from ACS referring to the above paper in JACS

11/4/2012 – Smithsonian Magazine – “Dinosaurs From Space![9]” – Analysis of the dinosaur idea with respect to evolution

25/4/2012 – Curious Wavefunction – “Would Ron Breslow’s dinosaurs be typing this post?[21]” – Discussion of humor in papers, self-plagiarism, and evolution

27/4/2012 – C&EN – “Breslow Paper in JACS Questioned[28]” – Editor-in-chief of C&E News reports on the pulled paper in the official newsmagazine of the American Chemical Society. The article was updated on 30/4/2012 with a comment from Breslow.

30/4/2012 – Curious Wavefunction – “The anatomy of peer review: Why airing dirty laundry in public is important[31]” – A fantastic post on two scientists’ quest to correct the scientific record in the wake of another infamous paper by Breslow

1/5/2012 – Just Like Cooking – “Same (Space) Science, Different (Dino) Day[32]” – See Arr Oh points out other similarities among many of the recent origin-of-life papers written by Breslow

20/5/2012 – Retraction Watch – “JACS makes it official, retracting Breslow ‘space dinosaurs’ paper for ‘similarity to his previously published reviews’[35]” – Ivan follows up now that the JACSpaper has been withdrawn

Acquire this Domain
You can acquire this site’s domain name! We have nurtured its online marketing value by systematically curating this site by the domain’s relevant keywords. Explore our content network – you can advertise on each or rent vs. buy the domain. Buy@TLDtraders.com | Skype: TLDtraders | +1 (475) BUY-NAME (289 – 6263). Thousands search by this site’s exact keyword domain name! Most are sent here because search engines often love the keyword. This domain can be your 24/7 lead generator! If you own it, you could capture a large amount of online traffic for your niche. Stop wasting money on ads. Instead, buy this domain to gain a long-term marketing asset. If you can’t afford to buy then you can rent the domain.

About Us
We are Internet Investors, Developers, and Franchisers – operating a content network of several thousand sites while federating 100+ eCommerce and SaaS startups. With our proprietary “inverted incubation” model, we leverage a portfolio of $100M in valued domains to impact online trends, traffic, and transactions. We use robotic process automation, machine learning, and other proprietary approaches to power our content network. Contact us to learn how we can help you with your online marketing and/or site maintenance.

This website uses cookies to improve your experience while you navigate through the website. Out of these, the cookies that are categorized as necessary are stored on your browser as they are essential for the working of basic functionalities of the website. We also use third-party cookies that help us analyze and understand how you use this website. These cookies will be stored in your browser only with your consent. You also have the option to opt-out of these cookies. But opting out of some of these cookies may affect your browsing experience.
Necessary Always Enabled
Necessary cookies are absolutely essential for the website to function properly. This category only includes cookies that ensures basic functionalities and security features of the website. These cookies do not store any personal information.
Non-necessary
Any cookies that may not be particularly necessary for the website to function and is used specifically to collect user personal data via analytics, ads, other embedded contents are termed as non-necessary cookies. It is mandatory to procure user consent prior to running these cookies on your website.
SAVE & ACCEPT
Generated by Feedzy